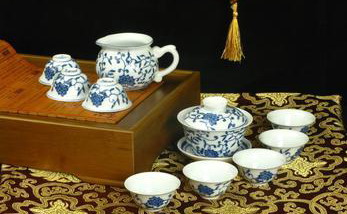 (b) Song Qinghua Tang Qinghua did not develop rapidly after the initial period, but it went down. So far, we can see that Song Qinghua only had more than a dozen pieces of porcelain unearthed from two tower base sites.

(3) Blue and white flowers: Mature blue and white porcelain appeared in Jingdezhen in the Yuan Dynasty. The most important feature of the decoration of the Yuan Blue and White is the fullness of the composition, and the level is not chaotic. The brushstrokes are more often seen in strokes, smoother and more powerful; Theme motifs include people, animals, plants, poetry and so on.

(4) Ming and Qing Dynasties: The period of the Ming and Qing Dynasties was a time when the blue and white porcelain reached its peak and declined. Ming Yongle and Xuande period was a peak of the development of blue and white porcelain. It was famous for its exquisite workmanship. During the Qing Emperor Kangxi, the â€œblue and white flowersâ€ â€‹â€‹made the blue and white porcelain to its peak; after the Qing Emperor Qianlong, it gradually went into recession due to the development of pastel porcelain, although in the late Qing Dynasty ( Guangxu was once rejuvenated and could not continue the momentum of the Kangxi dynasty. In general, official kiln makers in this period were meticulously and delicately manufactured; folk kiln utensils were casual, free and easy, and the screen was very expressive. From the late Ming Dynasty, blue-and-white painting gradually absorbed some elements of Chinese painting techniques.